I lost a friend this week.

It’s weird how hard it hit me. We were colleagues really, and distant ones at that, but in this solitary line of work you form unlikely bonds with people you might not ordinarily have met. And so it was with Gustavo Cuadrado.

I first met Gus maybe four years ago in Madrid, but we’d been working together on and off before that. He was the designer of the Batman Miniature Game, before I ever even came on board with Knight Models, and he was my principle contact with the company. We always found it funny that his spoken English wasn’t great, and my Spanish was terrible, and we both found it easier to email each other than talk face-to-face. That’s language barriers for you. But when I flew out to meet the Knight Models team for the first time, we hit it off. It didn’t matter that sometimes we talked at cross purposes, or I said something stupid while trying to order food at a restaurant, or he completely misunderstood me when I tried to explain an idea for Line of Sight rules. When the fluent English speakers had gone home, it was Gus who came out for drinks with me at a local bar or at the hotel so that I didn’t feel lonely in a strange land. Sounds daft maybe, but it mattered to me.

The other weird thing was that he was a fan of mine. This is a client who’d already risen from freelance designer himself to a senior role at Knight Models. He helped run things in the studio, and between us Jose (the owner of Knight), Gus and me would thrash out all sorts of ideas for new releases and crazy games. I think some of those games might never see the light of day, because they were very much Gus’ babies, and that’s such a crying shame because man, they were out-of-this-world ideas, full of ambition and love for the hobby. But this is a guy who’s about the same age as me, and he was already doing great work in the industry. He stopped being a fan and became a peer. We’d bounce ideas off each other, correct each other’s mistakes. He knew his stuff.

Gus had real integrity, and humility. He wasn’t in this for any kind of fame or glory. He was in it for the love. He didn’t care if his name was in a book or not. When we worked on Harry Potter in the early days, I flew over to help with a bunch of promo videos. He was behind the camera feeding me lines while I sat there in a wizard’s robe doing interviews and playing games (getting all the rules wrong). He designed the game, but he wanted me to be ‘the face’ of it, maybe because he didn’t think his English was up to it, but really because he didn’t care for the spotlight – he literally only cared that people played his games and had a good time doing so.

Just over a year ago, I went back to Spain to talk about future freelance projects. In a quiet moment, Gus took me aside and told me the news, that he’d been diagnosed with cancer and was about to start his treatment the very next day. He was practical and pragmatic in his outlook, as he always was about everything. He was due to get married and go on honeymoon just one month later. Talk about timing. The wedding went ahead as planned. Gus’s wife is a treasure – that’s love, right? I can’t imagine what she must be going through if someone like me, a British guy who only met Gus four times, is literally crying at the loss.

One year. That’s all it took to go from diagnosis, to chemotherapy, to realising the treatment wasn’t working.

He got in touch with me a fortnight ago to tell me he was dying. He’d come off the treatment so he could stop feeling sick, and maybe just have some peace in his final weeks. And all he wanted to do was talk about games. He was fascinated by my latest rules. He was reading new rulebooks on his sickbed instead of novels or magazines. He was absolutely dedicated to the hobby industry right to the end.

Less than two weeks later, I get a message from Knight Models with the worst possible news, asking if I could write an obituary for social media. It’s not because I knew him the best, or loved him the most, but because I’m their words guy now that Gus is gone. That hit hard. I shed a few tears and then had to write some words on behalf of all these guys who were his friends, who’d known him for years, and worked with him every day.

My thoughts are with those guys right now, because they have to carry on, and do so with the legacy that Gus left behind. When you play BMG or DCUMG in particular, you can really see Gustavo’s own design style and ethos, because he threw himself into his work with real passion. Now the torch is passed on, and it’s our job to continue what Gus started. I find it weird to talk about that – distilling this tragedy into ‘the job’. But at the same time he was completely devoted to this crazy industry, and the best way we have to keep his memory alive is to keep his games alive. 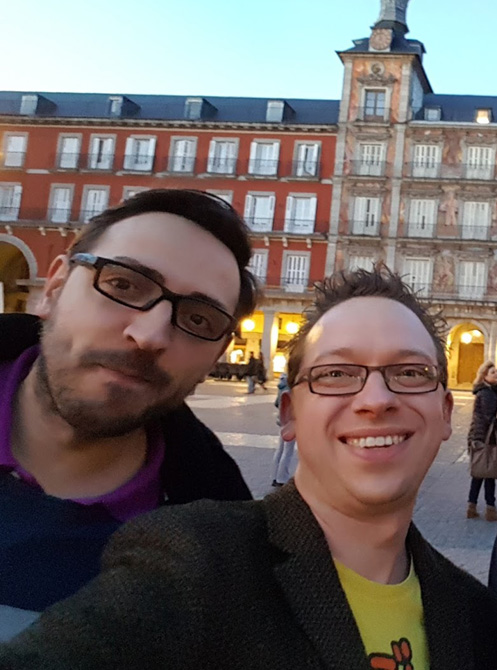 Right now it feels raw, and I don’t even know where to start. So I think I’m just going to step away, and think about Gustavo, the man, not the games designer. About what a great dude he was, and how he was taken way too soon.

Tweets by @aLostVictorian
Go to Top