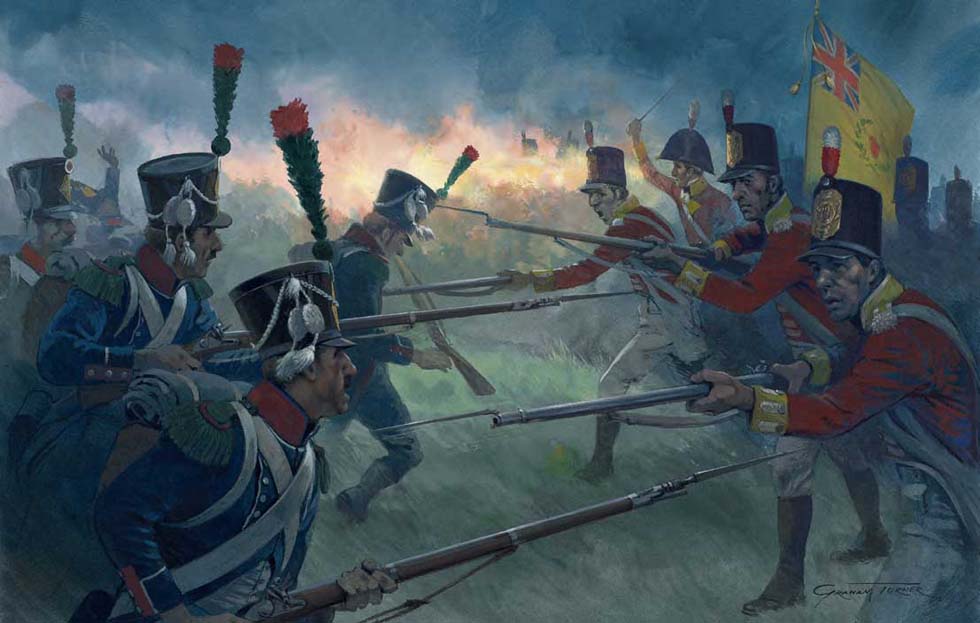 Ah, the smell of musket-smoke, the roar of cannon-fire, the pounding of hooves on cracked earth. It’s been a while, but it’s good to be back in the Napoleonic era with Chosen Men. My previous efforts have included Trafalgar and Waterloo, both for the now-defunct Warhammer Historical, and two very different exercises in games design for me. Trafalgar, for instance, was written as a fast-play, cinematic interpretation of Napoleonic naval combat – something I thought was lacking in an otherwise packed field of ‘simulation’ type naval games. Waterloo, on the other hand, was an effort to take the huge breadth of Napoleonic-era land battles and wrap them up into an accessible set of rules for all, sort of bridging the gap between glossy fantasy battles and the grit and substance of the historical Napoleonics gaming scene.

So, where does Chosen Men fit on that scale? Naturally, as it’s me, somewhere between the two! This is very much a ‘Mark Latham’ game, so if you like what I’ve done before, you’ll probably like this one too – it plays differently, but has a similar vibe. However, I know that fans of Osprey’s wargames series want as much grit as can be reasonably milled into those slimline volumes. Therefore, while I haven’t become a grognard overnight, I’ve gone for a balancing act between a cinematic feel and ‘realistic’ mechanics. It’s a tricky one, that’s for sure…

I’ve loved Napoleonic history for a long time, but as I’ve always said, gaming for me is rarely about simulation, but about fun and action, and telling stories through the use of miniatures. I get the same thrill from a good tabletop game as I do from watching a movie, playing a video game or reading a good book. As such, when I start designing an historical game, I start by gathering inspirational material. Out came the Waterloo DVD and Sharpe box set. The Master & Commander soundtrack got queued up on the PC. 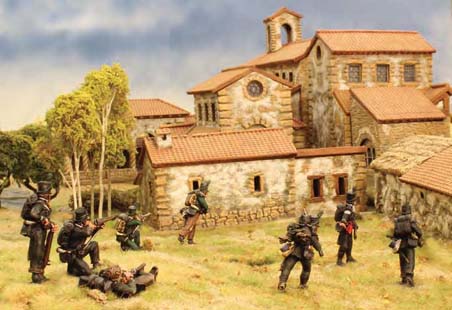 My reading list went from the usual Sherlock Holmes and Gothic horror books to Cornwell, Scarrow and O’Brian. (Yep, Sharpe appeared in twice on that list. And I’m unabashed – the game is called Chosen Men, after all).

A BIT OF HISTORY

The format of Osprey wargames books can make it tricky to include much in the way of background text (the dreaded ‘fluff’). With my last Osprey project, Broken Legions, I tried to circumvent the issue by having a line or two of flavour text next to various rules, and making the rules themselves get across the themes. With Chosen Men, the lack of historical text is more than compensated for by the vast range of Osprey history books available. These allow players to buy one or two ready-made ‘sourcebooks’ for their chosen force. Let’s be honest, my collection of Osprey volumes made up the bulk of my research for this game! They also provided rich pickings for the editors when furnishing the book with art. As well as some fantastic new pieces, and that stunning cover, the book includes some of those lovely colour plates for which Osprey is so famed.

In fact, the only limitation I really felt from the limited space was that I couldn’t fit a set of campaign rules into the book – anyone who knows my games design history knows that I love me some campaigning!

Chosen Men is a set of fast-action skirmish rules detailing the bloody skirmishes between light troops in the Napoleonic Wars. The primary focus of the game is on soldiers and NCOs in light ‘wing’ companies, as they scout ahead of larger forces and take part in man-to-man actions against enemy skirmishers. The game can be set in a number of theatres of war: such as the Peninsular War, where British and Portuguese riflemen, and Spanish Guerillas, not only acted as part of Wellington’s army, but also engaged in small objective-driven actions across Spain against the French; the Hundred Days campaign, where skirmishers on both sides were sent to clear key objectives in vicious building-to-building combat; and 1812, where the Russians launch brutal hit-and-run attacks on Napoleon’s starving, retreating army.

This game is about small actions set against a backdrop of unrelenting war, where morale and tenacity often count for more than accurate musketry. For the most part, officers are not swashbuckling super-heroes, but staunch commanders who rally and direct their men to achieve the battlefield objectives.

Chosen Men focuses on small, agile units of, on average, 5-20 men. It might be imagined that these are hand-picked men sent to achieve some objective away from the main theatre of war – this game doesn’t concern itself with larger-scale conflicts, except to give a broad impression that they’re going on ‘off-camera’, so to speak. Although some regular and elite infantry and cavalry are present for the sake of providing options, the ‘army lists’ stick mainly to light troops and irregulars.

Typically, an ‘army’ in Chosen Men will number 30-50 men, depending on quality, and possibly a light cannon or two. A game of that size should play out in about an hour once you’re familiar with the rules.

This, then, is a fast-play set of rules, operating on a 1:1 figure ratio, with small autonomous units. Not your usual Napoleonic game, but then, it’s not meant to be – this is a great point of entry for people who just want to field small formations of 28mm figures, and might be put off by big battalions.

Units are pretty much autonomous on the battlefield, although having officer nearby, or actually part of a unit, greatly enhances their ability to stand when the going gets tough. Units have their own stats and leadership value, and can take a number of actions in a turn based on their Tactical value – the higher this number, the more well-drilled the troops, and the more actions they get in a turn. These points, however, must be split between manoeuvring, shooting and fighting, so must be used wisely. The game is not strictly IGOUGO, but ‘alternating action’. Players take it in turns to move and act with a unit at a time. However, officers can sometimes use their command radius to move a whole section of their force at once, or forego this option to move out-of-position troops into the fray more quickly.

The game uses a D6 system. Whereas my other recent Osprey game, Broken Legions, used D10s to deal with very granular modifiers and drawn out one-on-one combats, this game is more about group musketry and quick, bloody hand-to-hand fights. You’re dealing with units of men at a time rather than individuals, and so I’ve tried to keep modifiers to a minimum.  The complexity of the mechanics comes in the combinations of special rules and orders, representing the intricacies of command and control on the battlefield – the basic actions taken by units on the other hand, are streamlined, allowing for fast gameplay.

The nuts and bolts of the rules – moving, shooting, fighting, and morale – naturally make up the bulk of the book. Army lists and scenarios make up the remainder – the armies included are France (and their Peninsular allies), Great Britain (and both their Peninsular and Waterloo allies), and Prussia. However, every game needs one or two special features beyond merely [sparkling, flawless] core mechanics to make them stand out from the crowd. The two bits I’m most pleased with in this game are the Cauldron of War Strategies and Commander Traits.

Cauldron of War Strategies are randomly determined for each player in the first turn of the game. This special rule represents the raging battle that is going on just beyond the bounds of the gaming area, as though the skirmish taking place is merely a snapshot of a much larger engagement being fought all around. So, for instance, you might gain ‘The Big Battalions’, which means you have some large blocks of infantry just off the board, and when your opponent moves a unit to within 12” of the edge, you can give them a volley of massed musket fire. Similarly, you might roll ‘Artillery Bombardment’, meaning that some of your army’s cannons are directed in the direction of the skirmish action, sending a timely bombardment to shock and awe the enemy.

Commander Traits are less epic in scale, but no less influential. Every army has an overall commander, usually an officer of Colonel rank or similar (although as this is a skirmish game, you might also have things people such as Spies in charge of your little task-force). You can purchase Traits for your commander to show just what kind of leader he is. Some, like ‘Flogging Officer’ might allow you to automatically rally a broken unit, but at the cost of a Morale value penalty for the rest of the game. Others, like Tactical Genius, show on officer’s real quality, by allowing his units to perform additional actions. There are lots to choose from, and they allow you to not only personalise your force’s leader, but by extension your whole army.

So there you have it – this is a game all about stirring, heroic actions and feats of derring-do, set against the backdrop of Napoleon’s campaigns. I hope you have as much fun playing it as I had writing it! 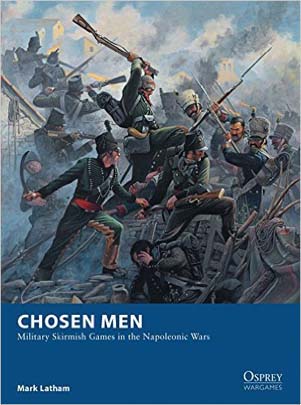 Chosen Men is published by Osprey Wargames, and is available now from all good bookstores. You can order it direct from Osprey here.