Ghosts of Future Past 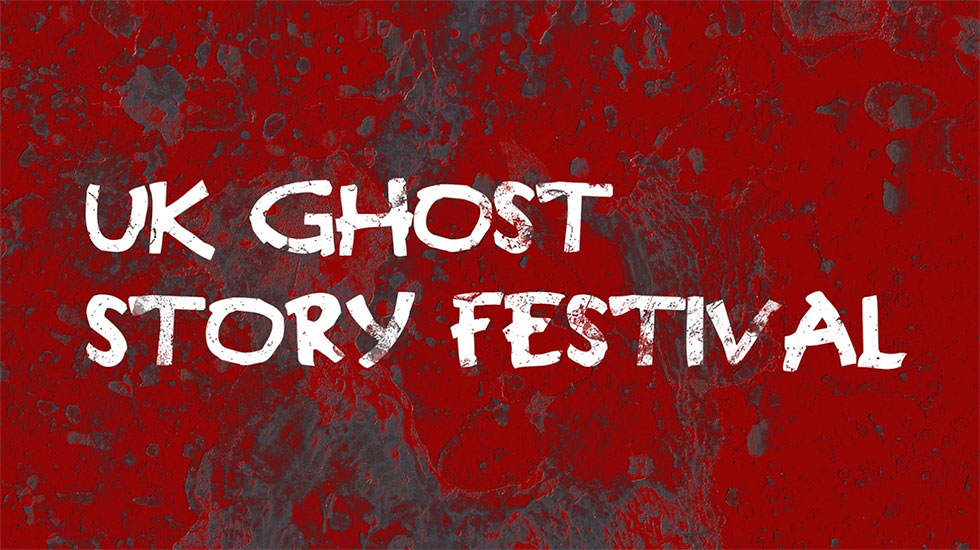 In my second December ghost story blog, I’m looking back at another panel from the recent UK Ghost Story Festival. Entitled History in the Making, this one compared and contrasted classic ghost stories with the modern form, and asked not only where the ghost story is headed in the future, but whether it’s even relevant to modern audiences.

(Like last time, I’m incorporating a summary of the discussion into my own thoughts on the topic, so a big shout-out to fellow panellists Laura Purcell and Paul Kane for their insights, and to our wonderful chair Sophie Draper for her thought-provoking questions.)

Any discussion of the modern ghost story should probably kick off with a look at the current masters of the form. For me, Michelle Paver and Adam Nevill are really excelling right now. John Connolly’s Night Music collections are truly superb. Meanwhile, aforementioned panellist Laura Purcell, along with Alison Littlewood, are proving that the long-form supernatural novel is very much thriving.

When you look at how the modern ghost story compares to the classics (M R James, Walter de la Mare, Elizabeth Gaskell, etc.), the parallels are really clear. In form and structure not a lot has really changed, and that’s probably due to the shared origin – those fireside tales I talked about in last week’s blog still form the basis of the traditional spooky story. What has changed, however, is the subject matter. The old clichés are generally best avoided (unless they can be subverted in a surprise twist). That’s not the same as conjuring a sense of the nostalgic, however – the Gothic form still thrives because its tropes are so familiar to the reader, and reading a good, slow-burn Gothic ghost story can be like slipping into a comfortable pair of slippers, voluntarily subjecting oneself to what M R James called a ‘pleasing terror’. 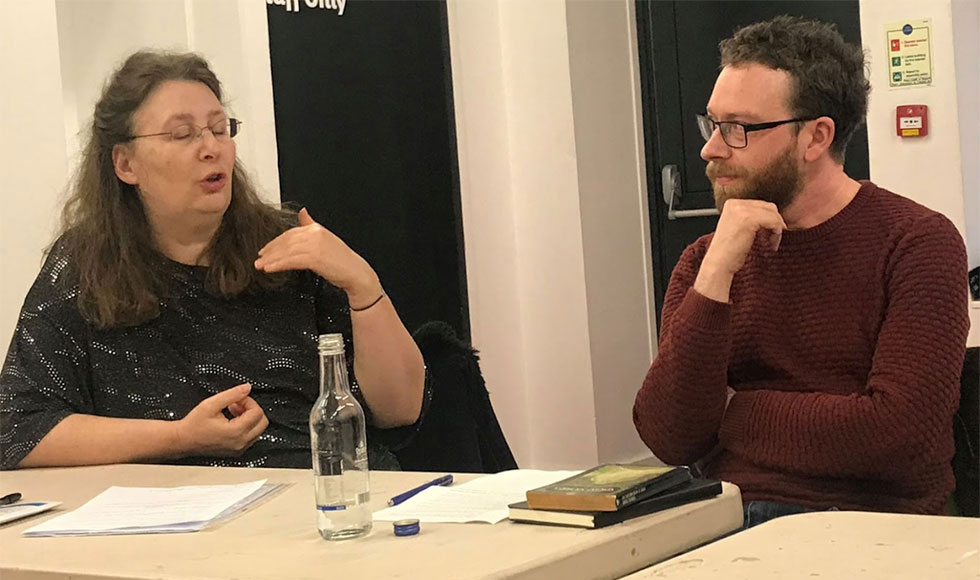 Sophie asks an inciteful question,
while I make my serious pondering face. 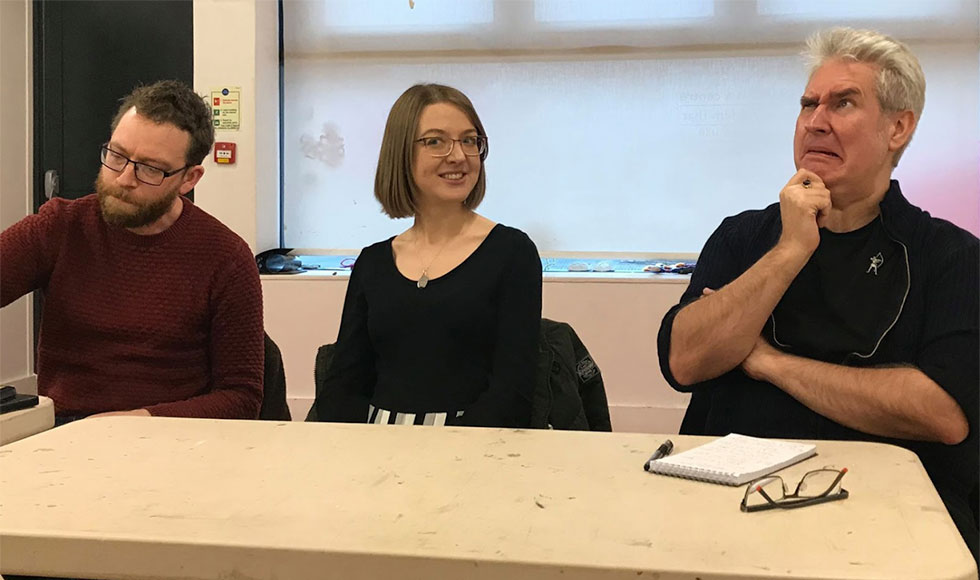 From left: Me, Laura Purcell,
and the greatest picture of Paul Kane ever taken.

One thing that has changed, however, is the form and nature of the ghost itself. These days we find malevolent spirits inhabiting social media accounts, transmitting themselves like viruses, etching themselves onto old VHS tapes, or communicating through white noise on an untuned TV. It’s hardly surprising – what’s scarier than having your everyday life invaded by a malign presence? M R James said that a feature of the successful ghost story is that the spirits themselves are contemporaries of the protagonist. In the essay ‘Some Remarks on Ghost Stories’, he said the modern idea of the ghost story had ‘setting and personages of the writer’s own day’. He was generally against ‘ancient’ ghosts – if a ghost ‘resembles a man in a pageant’, he didn’t think it was very scary.

Something we are seeing in the modern age, however, are new and interesting ways to tell a ghost story beyond the traditional printed or spoken word. The formalised short story is still pretty popular, but it’s being slowly superseded by things like creepypasta. Viral ghost stories – often manufactured, like Slenderman – have had a huge cultural impact. The ipad/monitor is the new fireside – kids are still scaring each other silly with ghost stories and urban legends; they just don’t have to contain it within their circle of friends any more. We tell ghost stories to strangers on the internet rather than to our family on Christmas Eve.

I think we’re going to see more interesting uses of modern technology and the ghost in the machine. Perhaps more of the blurring of lines between SF and the ghost story (I really like Adam Christopher’s the Burning Dark, which is really a ghost story set against the backdrop of an interstellar war). We’ve already seen lots of overlap between transhumanism and horror – the idea that we can transplant our consciousness into a server to live on after our bodies die (but then, is the mapped program really us? Does it contain our soul? Have we literally just turned ourselves into ghosts?) – these sorts of hyper-modern concepts are taking the ghost story to new places. After all, the ghost story has traditionally struggled to deal with modern technology – ghosts are less scary if you can take out your mobile and call for help, so storytellers used to simply use locations with no data or wifi. Oh no! But increasingly I think we’re seeing the ghosts actively using tech like phones to scare the pants off people. That text you received telling you to go to the spooky old house wasn’t really from your friend… There’s a bit of a primal fear attached to communication devices, where I suppose making a simple phone call could be a bit like conducting a séance – you never know who, or what, is on the other side.

Even this isn’t a new idea, of course – the Victorians were using electricity to commune with the dead 150 years ago. Parapsychologists use gadgets to detect and monitor ghosts, so why shouldn’t the ghosts use them back? Even my own story, One New Follower, features a ghost that used to get about when people saw it, then advanced to photography, and finally embraced the freedom granted by the Insta generation. Ghosts gotta move with the times. 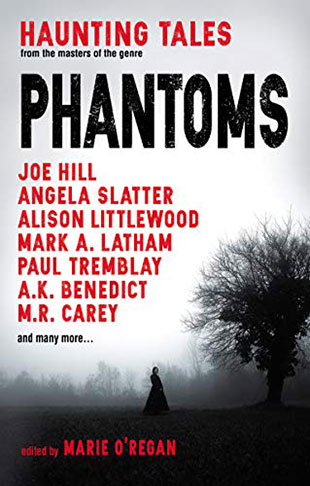 One theme that has remained surprisingly strong in the ghost story is religion. In some respects, it’s understandable – after all, the ghost story really exists to help us wrestle with the big questions about the soul, and life after death, right? But society is growing increasingly secular, so it’s a big leap for most people to think you can call a Catholic priest to exorcise the ghost. What if you don’t believe? What if the ghost doesn’t believe? Hollywood in particular seems to have an obsession with exorcisms, and the laying of ghosts by Christian priests and ministers, and we kind of accept that as a plot device. I do think we’re seeing less of that in British and world fiction. As soon as you can fix any haunting by calling a priest, you take away the spirit’s power. However, most people who read and enjoy ghost stories, and are scared by them, don’t really believe in ghosts any more than they believe in a god. So if you can suspend disbelief long enough to get scared, I guess you can handle the old consecration cliché.

(Speaking of belief, the panel was asked if we’d ever had a ghostly experience. We all had, in one form or another. I always say that I’ve seen enough to not rule anything out, but not enough to be sure of anything… the perfect amount to freak myself out).

I think the future of the ghost story is pretty healthy. It’s such a part of traditional storytelling in so many cultures around the world, that our grandkids will be telling them, and their grandkids, and so on. Will they be told in the same form? Well, I think a lot of that will depend on the creativity of the writers, and the power of changing trends. But our love of the pleasing terror isn’t go away any time soon.