I was putting together the obligatory FAQ and Errata document for my game Broken Legions the other day (located here, if you’re interested), and I had that inner voice groaning at me as I worked, the same one that always groans at me when I work on these things. Because I hate FAQs and Errata.

What are FAQs and errata? Basically, FAQs are frequently asked questions regarding rules, usually cropping up because of unforeseen combos or circumstances that didn’t arise during playtesting, while errata is simply Latin for errors. These are genuine mistakes, ranging from simple typos in the book, to omissions that got left out of the layout, or cut-and-paste errors where rules from an earlier version got left in the final manuscript, etc. 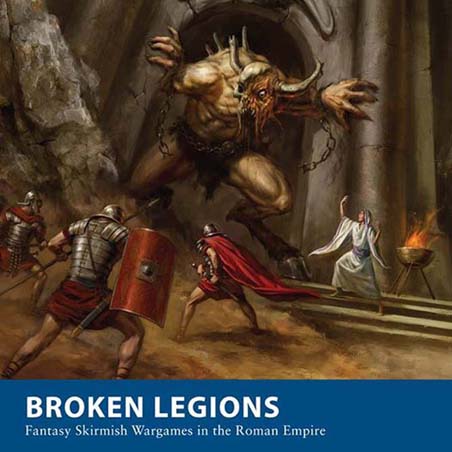 I called these documents obligatory before, and it’s true – if you produce a set of wargames rules, FAQs are usually necessary, but always expected. It’s virtually impossible to make an error-free book, and God knows I’ve tried. The biggest and most professional rulebook production team I ever worked in was at Games Workshop – a whole team of writers and game designers, who’d often ‘peer review’ each other’s work, two playtesting teams (one internal, one external), two sub-editors, a rules editor, a layout team to check each other’s graphic design, and me overseeing it all. And still we managed to make mistakes. Basically, when a set of rules gets released into the wild, suddenly you have thousands of people looking at it, whereas before there was only a couple of dozen. You also get people playing games with armies/warbands/crews that you may not have had the chance to test yourself, so the combination of Army X vs Army Y throws up all kinds of conflicts you just couldn’t have predicted. You get ‘min-maxers’ – competitive gamers who choose the most lethal combos they can see in order to mince their opponents… all these things tend to throw up questions.

Most FAQs can be solved by carefully re-reading the rules as written. Some can’t really be resolved with a simple ruling, and you might just need to accept that these things are never perfect, roll a dice to see who’s interpretation holds sway on this occasion, and move on. Others really do need clarification – it’s likely that the rules aren’t as clearly expressed as the author believed, or even if they are enough people have queried it as to require a more thorough explanation. If a question arises as a result of a mistake somewhere in the rules, that’s covered by the errata, rather than the FAQ.

Errata are dangerous. They are foul beasts, designed to tempt the unwary games designer into the worst imaginable sin: tinkering.

It’s all well and good to correct errors, but should you use errata to change rules for the sake of improving balance, or because you had a better idea later? Where does it end? I was reminded of this great sin just today, after reading yet another swathe of errata for the X-Wing Miniatures Game. These ‘corrections’ make sweeping changes in the form of nerfs and buffs to various ships and pilot cards in the game, usually in response to abuses of the game’s ‘meta’ amongst tournament players. And it’s mad as a box of frogs. 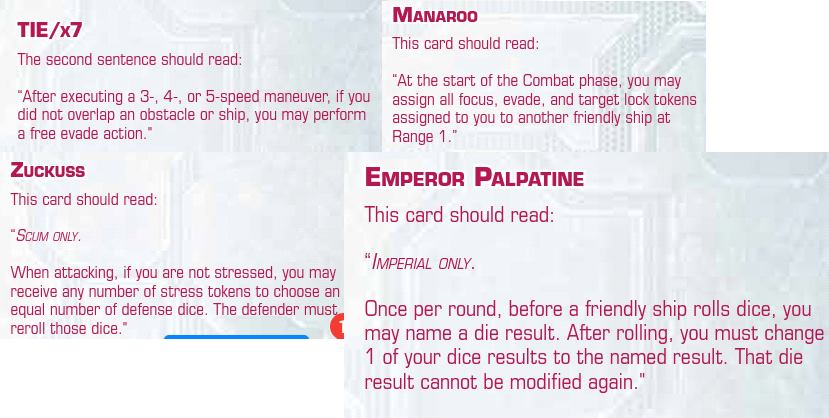 Why? Because who really seeks out errata? X-Wing is a game that relies on masses and masses of cards, all with rules printed on them. When a new player buys the game, his/her cards are already invalid. If you do have the errata, in order to have a game you have to select your cards, find the errata, realise your selection has been nerfed a dozen times since they were printed, change your selection, repeat. But who really keeps on top of the errata? I keep asking that because it’s important – competitive players are interested in errata, and actively seek them out. Casual players often don’t know they even exist. Are the casual players doing it wrong? Or are we, as designers, saying it doesn’t matter – as long as you have fun, who cares which version of the rules you play? But in that case why put so much time and effort into a document that only (and I hesitate to say this, as it’s not universally true) the minority of gamers will ever use?

I was picking on X-wing earlier, and that’s perhaps unfair, as all of my own games gave their fair share of FAQs and Errata. But I do try to be disciplined about what I cover. I do the bare minimum to make sure that the original intent of the design is upheld, and to atone for human error. I flat-out refuse to make wholesale changes to a game – even if those changes would ‘improve’ the game. My view is that wholesale changes should be noted down and reserved for a ‘second edition’ in the years to follow, rather than tinker with a published set, invalidate people’s purchases, and perhaps cause further problems.

Looking to the future (the future is now…), digital rulebooks have already revolutionised this entire process. Some companies make errata without you ever realising, ‘pushing’ through the changes as part of an update to the ebook. In some respects, that’s really cool, right? But what if you’re the guy who’s spent thousands of dollars on an army, only to have it nerfed via an update to a five-dollar app? What if you have a print copy of the book, but your opponent has the digital copy? Is the digital copy ‘right’, even though you purchased your print copy just yesterday? These are the questions that games companies (and humble freelancers like me) are wrestling with daily.

For now, I accept them as a necessary evil. Sometimes, if used responsibly and publicised well, they can even do good! But on the whole… I really hate ’em.